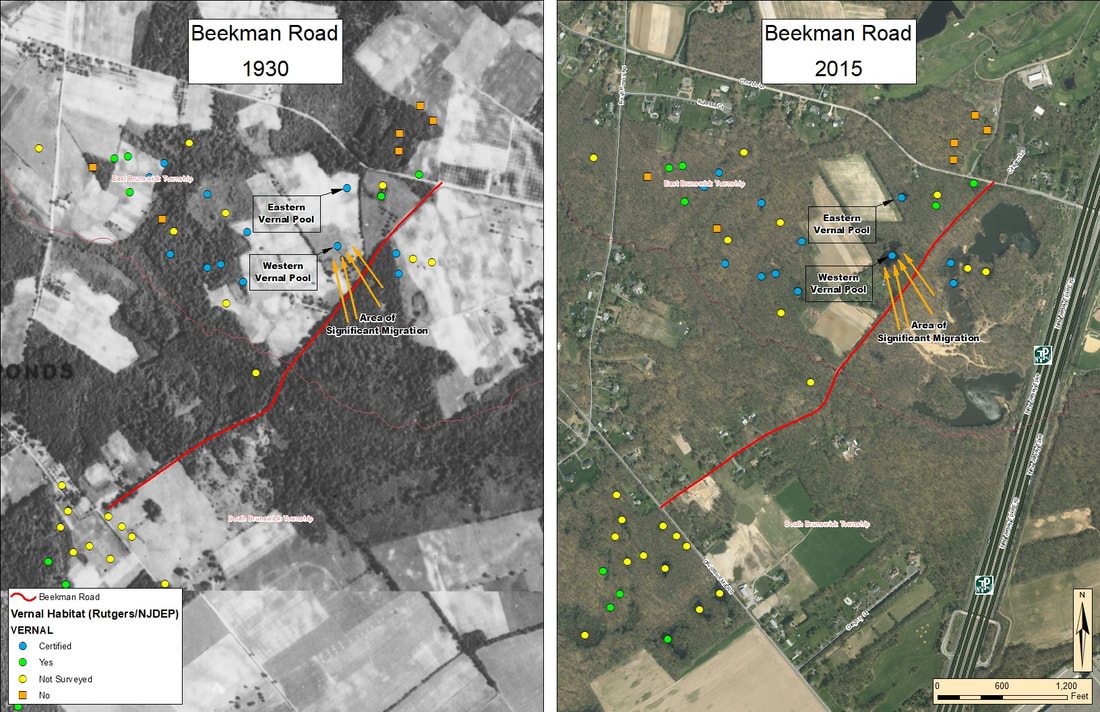 These two aerial photographs seem to tell an interesting story about the Beekman Road vernal pools and the annual spring salamander migration we have observed over the past 15 years. In 1930, both vernal pools and the area around them was farmed. Woods near the pools are only present to the south across Beekman Road and to the north near Church Lane. As can be seen in the 2015 aerial photo, the entire area to the south, both adjacent to and across Beekman Lane, has matured to forest as the farming ceased. This history of land clearing and what remained as woods appears to explain one of the dynamics we have noticed since we began closing the road in 2003. As can be seen on the aerial photos, we have noted the area of the most significant migration we see each spring. This corresponds very closely to the area that remained wooded in 1930. This makes a lot of sense, given the ecology of spotted salamanders. These salamanders breed in the vernal pools in late winter and early spring but also need forested areas where they spend the remainder of the year. Many scientific studies have also documented that spotted salamander utilize the same migratory pathways each year to enter and exit the vernal pools. If we extrapolate these life history habits and ecological requirements, we can hypothesize that the wooded areas that remained in 1930 may have served as refugia for this population of spotted salamander allowing them a remnant wooded area to spend the post-breeding period and winter hibernation.

Prior to farming in the area around the pools, whenever that was, there may have been movements to and from the pools in all directions into what would have been surrounding forest. But, with land clearing and the loss of that surrounding forest, only those salamanders coming from the area that was wooded in 1930 might have survived. As a result, our spotted salamanders may very well be the descendants of those that were lucky enough to be utilizing that migration pathway when the land was cleared and most of the forest was lost. The significant migration we see as represented by the arrows could very well reflect this previous reliance on the woods that remained in 1930.

One interesting unknown if these woods were harboring a remnant population is how they survived crossing Beekman Road and the intervening farmland. One possibility is that the breeding migration and post breeding dispersal of adults typically occurs at a time when there wouldn’t be any farming going on. How newly metamorphosed juveniles would have made it across this area and back to the woods is unknown. It is also probably unlikely that Beekman Road had any kind of major impact on the population, as we have been told by “old timers” in the area that it was not paved until the 1960’s and even then, traffic would have been limited due to the rural nature of East Brunswick and the surrounding area. Of course, all of this is simple speculation, but it does seem to fit with what we see. In any case, since that time, as the woods around the pools have regrown, more habitat has likely become available for the salamanders and it is suspected that those crossing Beekman Road only represent a portion of the current population. We now seem to see spotted salamanders crossing Beekman Road over a much broader area than we originally did and Wood frogs have magically appeared and begun breeding in the pools again too!
​
We should also point out that the dots on the aerial photos are from the NJDEP\Rutgers Vernal Pool Mapping Project that utilized aerial photo investigations coupled with limited fieldwork. Blue dots represent those confirmed to have vernal pool amphibian species, green dots those that have the required hydrology but no confirmation yet of amphibians, yellow dots have not been looked at yet, and the gold squares have been determined not to be vernal habitats. As all of the land on both sides of Beekman Road is now County property as part of the Irelands Brook Conservation Area, there is so much to explore. Let us know what you find in those dots!
​
Powered by